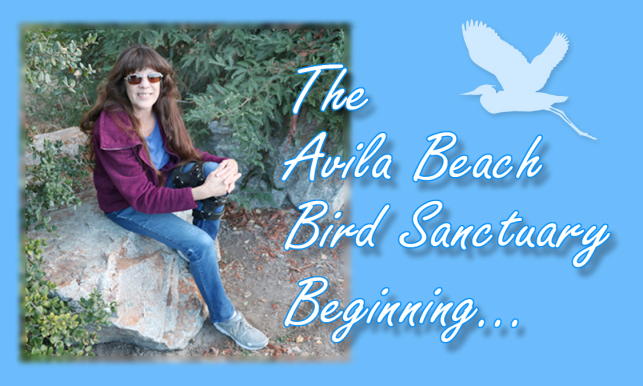 Meet Shirley Goetz, founder of the Avila Beach Bird Sanctuary. Shirley began her quest in 2010 to protect the migratory bird populations within the Avila Beach area, specifically the Cliff Swallows, who make their annual migration in early Spring from South America. Recent changes in Avila Beach's infrastructure has yielded a large volume of new construction and the Cliff Swallows often cause a nuisance for home and business owners, as these birds build their nest under eves of buildings and can create a bit of a mess, so nests are commonly (and illegally) destroyed by humans, though these birds are protected by the Migratory Bird Treaty Act of 1918.

Her efforts produced plenty of information to take her cause to the next level, to educate the public to existing bird laws and provide effective preventative solutions to those needing to take action before the Cliff Swallow's arrival. Shirley's love of birds prompted her to rescue baby chicks from fallen or destroyed nests and taking them to Pacific Wildlife Care, which ultimately resulted in her obtaining formal training and becoming a volunteer with the organization.

During Shirley's time studying migratory birds, she learned about the many varieties of birds that pass through the Avila Beach area on their migration routes, and the different times of year certain species were present. This was the beginning of her idea and effort to set plans in motion to officially designate Avila Beach as a Bird Sanctuary. With the help of Andrew Cristy, Director of the Santa Lucia Chapter of the Sierra Club, a petition was produced on July 19, 2012. Shirley promptly collected signatures from residents, local businesses and visitors in support of the proposal. With an increasing stack of signed petitions the proposal was ready for the next level.

The next phase of her journey to create the ABBS (Avila Beach Bird Sanctuary) was to obtain support from local governing organizations. Shirley prepared a presentation and scheduled time on various meeting agendas to present her proposal and request for written support from the board(s) to be presented to the San Luis Obispo County Board of Supervisors for consideration.

One main component necessary for the project was public roadside signage. Two signs would be required, one placed at each of the two primary entrances into Avila Beach. The Avila Beach Tourism Alliance graciously stepped up and offered funding to pay for the signs! Things were moving forward now! Shirley made a request to the Avila Beach Community Foundation and asked if they would accept the check from CBID (County Business Improvement District) for the signs. The executive director, set up a temporary restricted fund on behalf of the Bird Sanctuary Project. The check arrived and signs were delivered on February 18, 2014 to Glenn Marshall of Public Works Department for installation. Shirley took great pride in designing these historic signs. An additional sign was later placed along the Bob Jones Bike & Hiking Trail, thanks to a grant from the SLO County Board of Supervisors.

With the signs installed along Avila Beach Drive, it was time to celebrate! Shirley thought a ribbon cutting ceremony would be in order. An acquaintance of Shirley suggested forming a planning committee of local volunteers to assist with the task. Finally, on September 20th, 2014 the official ribbon cutting event took place with Supervisor Adam Hill giving congratulations at the Avila Beach Bird Sanctuary Inauguration, commending the efforts of Shirley Goetz and the community of Avila Beach. Chairman of the Northern Chumash Tribe, Mona Olivas-Tucker gave a blessing of the Bird Sanctuary. The Avila Beach Post Office produced a commemorative postmark stamp designed by Shirley Goetz, (this postmark was listed on the US Postal Service website and as a result, bird lovers worldwide were sending envelopes to receive the special limited postmark!) The event included a presentation by Pacific Wildlife Care education ambassador, “Morro” a Peregrine Falcon and a presentation from Willow Tree Wildlife education ambassador, “Morro” the Brown Pelican. Storyboards explained the varieties of native and migratory birds in the area and a special theme song for the sanctuary called “Thunderbird” written by Irene Kelley, was performed by Billy Foppiano and Sharon Doran rounded out the day's celebration of events.

After the ribbon cutting ceremony, the planning committee volunteers disbanded and Shirley moved her efforts forward to develop the purpose of Avila Beach Bird Sanctuary and teamed up with California Highway 1 Coastal Discovery Route/Stewardship Travelers Program, an affiliate of the Avila Beach Tourism Alliance, where she established the Annual Avila Beach Bird Sanctuary Day. Held on the 3rd Saturday every February, the events included continued involvement from her constituents, and Shirley also improved these events with educational demonstrations about the hazards of plastics to the environment, and presentation trivia for school children which included prizes for correct answers. More future events were in the planning too.

One of Shirley's hobbies is music and nature video filming and editing. She made a delightful video featuring birds of the sanctuary that was shown at the San Luis Obispo International Film Festival on March 19, 2016. What a fabulous opportunity to promote the bird sanctuary and what an honor to have her video chosen! Some of Shirley's video footage collection, filmed here in Avila Beach, California was used in a movie by award winning San Francisco film producer, Judy Irving, called “Pelican Dreams” which played in theaters coast to coast. Judy Irving also produced a well known film called, “The Wild Parrots of Telegraph Hill” and was an honored guest and speaker at the 2nd Annual Avila Beach Bird Sanctuary Day, February 20, 2016.

As time moved on, and political personalities arose with their own agendas, sadly, good things come to an end. The holding account/fiscal sponsorship agreement with the Avila Beach Community Foundation was no longer functional and was closed, although verbiage appears as a line item on the original resolution from the County, it can not be revised, however, the ABCF is no longer taking donations on behalf of the Avila Beach Bird Sanctuary. Thus, future birding events, unfortunately, have all been suspended indefinitely. This in part as a result of a conflict of interest when a non profit was quietly formed by 3 people and discovered during a random internet search. The Avila Beach Bird Sanctuary founder, Shirley Goetz, has NO affiliation with this organization or any business the public conducts with them.

Below are some internet listings for some events and news articles about the Avila Beach Bird Sanctuary relating to the story above. Although some links to documents and websites listed may no longer be active or available on line, the following website URL's can be retrieved anytime by using the Internet Web Archive/Wayback Machine, simply copy the URL, paste and click search. You can also try clicking directly on the links below:

DEC 9, 2013 – Avila Valley Advisory Council – Adam Hill Reading of Resolution to the Board